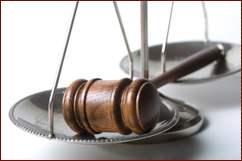 The defendant is given a specific amount of time to file with the court an answer to the complaint. The answer explains the defendant’s side of the dispute. Sometimes, the plaintiff responds to the defendant’s answer by filing a reply. In some instances, in lieu of an answer or reply, a party may request that the other party clarify or correct deficiencies in its factual allegations or legal theories, and this may lead to amended complaints or amended answers. Once the parties have settled on a complaint, answer, and reply, the case is said to be “at issue,” which means that the issues for resolution are now defined.

Settlement
It is generally wise at the beginning of the litigation process to review the potential and prudence of an out-of-court settlement. Indeed, most matters settle before reaching the trial stage. Settlement can be discussed by any party at any time during the litigation process. This is often a cost-effective alternative to trial. Usually the court does not require the parties to discuss or attempt settlement, but most courts have procedures by which a party can request the court’s assistance in settlement.

Arbitration is an adversarial proceeding in which the parties select a neutral third party, called an arbitrator, to resolve their dispute. The process is abbreviated and less formal than trial. Arbitration often arises from private agreement, but many courts also require the parties to smaller disputes to explore arbitration as an option to trial. Parties who agree to settle their dispute using “binding” arbitration usually cannot appeal the arbitrator’s ruling to the court.

Mediation also involves a neutral third party, but it is the mediator’s job to assist the parties’ settlement efforts. The parties select the mediator, who meets privately with each party to discuss the strengths and weaknesses of each side’s case. The mediator helps the parties identify the risks of the case and encourages them to consider how those risks can affect their goals.

Whether arbitration or mediation is feasible and practical usually depends on the parties’ willingness to use these methods. Each alternative usually saves time and expense, but either also might not result in a final resolution of the matter. The desirability of these alternatives should be evaluated early to allow their timely implementation.

The duration of a lawsuit depends on the issues of the case, the amount of discovery to be conducted, and court scheduling and availability. The parties, guided by the rules of court, usually decide the timing of discovery. Trial dates are set by the court. Timing and scheduling differ between state and federal courts.

Thorough case preparation is critical to any successful litigation. Research of the law, document review and organization, and witness interviews help clients and their lawyers assess the merits of claims and defenses. The extent to which these and other steps are needed is determined by the issues of the case.

Discovery is the method by which parties gather relevant information from each other or from third parties. Discovery is the longest part of the case: It begins soon after a lawsuit is filed and often does not stop until shortly before trial. During discovery, the parties ask for information about the facts and issues of the case. Information is gathered formally through written questions (known as interrogatories), requests for documents, and requests for admission (which ask a party to admit or deny statements of fact).

The use of depositions, in which witnesses are questioned under oath and in front of a court reporter by the parties’ attorneys, is another key method of obtaining information. Depositions sometimes may be used at trial to show inconsistencies in a witness’s story or to question the witness’s credibility. Depositions sometimes also may be used in place of a witness who is not able to attend trial in person.

Often a claim or defense requires support from expert witnesses to explain technical information or validate an argument. One or more experts might be needed to testify about the connection between the defendant’s conduct and the loss suffered by the plaintiff or the existence and amount of the plaintiff’s damages. Expert witnesses work closely with a party’s representatives and attorneys to prepare the party’s case.

Before trial, the parties may use motions to ask the court to rule or act. Motions usually pertain to law or facts in the case, but sometimes they seek clarification or resolution of procedural disputes between or among the parties. Some motions, such as the motion for summary judgment, which asks the court to dismiss part or all of a plaintiff’s case or a defendant’s defense, dispose of issues without trial. Other motions might ask the court to order a party to produce documents or to exclude evidence from trial.

Where a large group of persons have an interest in the same subject matter, a class action enables one or more persons to bring a lawsuit on their own behalf and on behalf of the group, without needing to identify and include each individual member of the group. The procedure is authorized in federal courts and in the courts of most states including Colorado. When a complaint is filed as a class action, the plaintiff must file a motion for class certification which asks the court to determine whether the individual plaintiff can represent the interests of the group. Generally, the question for the court to consider is whether all members of the group have claims that are so similar to one another that a single group trial is an efficient way to resolve the matter. If a class is certified, the lawsuit then proceeds on behalf of the entire group.

At trial, the parties present evidence in support of their claims or defenses to a jury and/or judge. Immediately before trial, each party provides to the judge a document, called a brief, outlining the arguments and evidence to be used at trial. In a jury trial, both parties question potential jurors during a selection process called voir dire. Once the jury has been selected, each party presents its outline of the case in an opening statement.

Evidence is then presented. Each party may call witnesses or introduce documents and exhibits in support of its arguments. The plaintiff presents evidence first, then the defendant. Sometimes, the plaintiff is allowed to present additional evidence, called rebuttal evidence, after the defendant has finished presenting its case.

The party who prevails at trial will file a motion requesting the court to order the losing party to pay the prevailing party’s costs to prosecute or defend the case. Recoverable costs are defined by rule, statute, or private agreement and generally do not include attorney fees. Recoverable costs rarely cover all out-of-pocket costs a party incurs during the course of a lawsuit.

Following trial, a party dissatisfied with the result may seek an appeal. During an appeal, a party asks another court to review the trial court proceeding. The parties present their arguments in briefs, which are submitted to the appellate court along with the record of evidence from the trial court. An appeal can extend the litigation process by a year or more.

A positive result in your case is the product of teamwork. You bring your knowledge and familiarity of the facts necessary to effective case preparation. The firm provides the legal expertise to help you through the litigation process.

The strength of our partnership depends on mutual communication and understanding. The expectations outlined above are guidelines to facilitate an open and candid working relationship. The product of this relationship will be a resolution consistent with your goals.

Working Off the Clock

IT, Computer and Tech Support